How often do you write checks? Maybe you pay rent with a check once a month, or pay for a large grocery purchase. But overall, it seems like checks are on the decline, especially in our modern world of finance apps. Payments are going digital, which begs the question: are paper checks becoming obsolete?

Checks in a Digital World?

For the most part, payments have gone digital. In addition to credit cards and debit cards, there are also built-in smartphone apps like Google Pay and Apple Pay. Not to mention third-party apps like PayPal and Venmo. Also, even things like rent payments can be handled online in some cases. So, a physical item like a check seems a bit clunky. You have to write down a lot of information, and then the recipient has to sign and take time to deposit it. Even then, mobile deposit features are readily available in bank account apps, and many banks store digital copies. On top of that, carrying a checkbook is not always convenient. Once you get your phone, wallet, keys, and anything else you need in your pockets or purse, there isn’t a lot of space for full-sized checkbooks and a pen. So what’s the point of having physical checks?

According to a study from the Association for Financial Professionals, in 2004, businesses used checks for 80% of payments. By 2016, that number had dropped to 51%. A 2016 study from the Federal Reserve shows that while check usage had dropped by 2 billion per year for several years, they dropped by less than 1 billion in 2016. So, despite the decline, that decline is slowing a bit.

They Make For Great Gifts

Getting a birthday or wedding Venmo just doesn’t feel quite as special as getting a check for one of those special occasions. This is one thing that can keep checks afloat. Not only with the older generations that still use checks regularly, but also millennials who grew up seeing their parents write checks.

Self-Employment is on the Rise

Self-employment, especially among millennials, is becoming more and more common. By 2020, 47 million people will be self-employed, half of which will be millennials. And in the business world, especially contract work, checks are still common. Many full-time employers offer direct deposits, but checks are a traditional and popular way to pay freelancers. So, self-employment contributes heavily to the use of checks in the modern day. 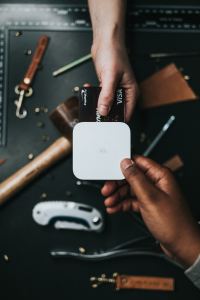 While you can use digital payments at many establishments, there are plenty (especially small businesses) that don’t accept those options. When digital is not an option, sometimes writing a check is easiest. Cash is almost always an option, but then you have to get change back (change that you probably will never use for anything if it’s in coins), or worry about carrying enough cash. But with a check, you can write an exact amount, and not have to worry about change, having enough money on you, or getting a receipt.

In Conclusion: Are Checks Obsolete?

Yes and no. Check usage has been declining for years, but there are still a number of uses for them. You may not use them every day, or even every week. But you will probably thank yourself for keeping checks around!

How often do you use checks? Have you fully switched to digital payment apps, or do you still write checks sometimes? Let us know in the comments below, or on social media!

One thought on “Have Digital Payments Made Paper Checks Obsolete?”